Flanagan's-A long established supermarket in South Boston, Flanagan's was replaced by a Stop n Shop in 2001.
Saint Vincent de Paul's-The Society of Saint Vincent DePaul is a Catholic charity with chapters around the country, including in Boston. People seeking help must apply for it through their local Catholic church.
​
​Station Six-​This is a local nickname for the police station for Boston PD District C-6 South Boston.
​reproductive endocrinologist-An obstectrics and gynecology surgeon that further specializes in the hormonal causes of infertility and disorders of the female reproductive tract
lace-curtain Irish-The term "lace-curtain" refers to an Irish American who has achieved financially stability and forgotten his or her roots, now looking down on poorer members of their community. As Mikey says, it means "you think you're better than people"--the ultimate fighting words in South Boston.
​ 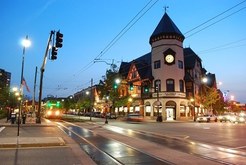 ​Brookline-​Brookline is a town bordering Boston city limits and considered part of "greater Boston." Generally considered a good area for families with its diverse culture and excellent public schools, Brookline housing is highly sought after. Currently the median rent price in Brookline is roughly $2750 per month, exceeding the Boston metro average of $2500. It is also known for being the birthplace of President John F. Kennedy.
Sugar Bowl-The Sugar Bowl is a walking/running trail connected to to Castle Island that loops around part of the water in South Boston.

​Sully's-Sullivan's (known as Sully's) is a popular food stand best known for its affordable seafood items. It is located on Castle Island in South Boston overlooking the bay.
​
Maury Povich-Maury Povich is a television personality and host of the Maury Show, a tabloid-style daytime talkshow in which people air their personal issues and conflicts with each other. Paternity is a popular subject on the program.
​
VFW-Veterans of Foreign Wars is veterans service organization that offers transition and employment services, financial grants, VA claims advising and additional assistance to veterans and their families.
​
Epoisses-Epoisses de Bourgogne is a creamy, pungent French cow's milk cheese with a washed rind.
​
Upton Sinclair-Upton Sinclair was an early 20th Century American author best known for writing about the plight of the very poor in America. His best known work is The Jungle, which helped to expose the unsafe and unsanitary practices of the meatpacking industry, helping to lead to the establishment of the Food and Drug Administration.
​